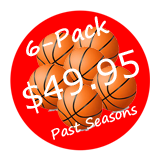 Now you can Play & Coach 40 of the best Professional Basketball teams ever to take the court!

When you think about the Best Teams, you always think of those great Lakers teams - and the Bulls of the 90's - and the Celtics of the 80's. But, there are lots of great teams that you might have forgotten about. Actually you get MORE than 40 Great Teams. When we were researching we determined that there were too many teams deserving of the status, so we added them to the package!

We've come up with over 40 of the Greatest Teams of All-Time. You get every player on those teams, along with a schedule so you can play your own season. This is just like every other Cactus League season. You can create your own teams, move players, edit players with AutoEdit, merge them with other seasons with AutoMerge, create new schedules with AutoSchedule Creator and even have your own draft with AutoDraft.

How will those 60's Celtics teams match up the Bulls of the 90's? Can your coaching make a difference?

Let your imagination be your guide. You've always wanted to play & coach the Very Best. Now you can!

Plus - You Get This Bonus!

Just for fun, we've added The 40 Worst Pro Basketball Teams to this package. Everybody knows about the 1972-73 Philadelphia 76ers, but there are lots of other incredibly bad teams out there. And, you will get them! Do you have the stomach to coach one of these teams for a whole season?

This is what we've done: We've analyzed each decade's major franchises and compiled 15-man All-Star Teams for each. We've packaged them in a unique way so you can play these teams and players from every conceivable angle.

You get Franchise All-Star teams for each franchise, for each decade! You will be able to see how basketball has changed over the years and enjoy the greatest athletes of all-time in context.  This is a great way to package All-Star teams because you get, for example, Wilt Chamberlain, on Syracuse/Philadelphia in the 60's and the Lakers in the 70's. Shaq on Orlando in the 90s and Lakers in the 00's. The Greatest Players on each franchise in each decade are included!

The Big One: The All-Time Franchise Greatest Hits

The All-Time All-Stars for each major franchise. It is tough duty trying to cut rosters to 15-20 players for many of these franchises. But, we've done it. In addition to the Decade All-Star Teams, you get the ALL-TIME Franchise All-Stars. Can you cut the All-Time Celtics' All-Star team down to 20 players? We have. And, now you can play & coach them on one team.

We even included a schedule with each set of Decade All-Stars so you can play a full season with the All-Stars.

You Can Make Your All-Star Teams Be Whatever You Want

With Cactus League Professional Basketball AutoMerge you can make your All-Star teams be anything you want them to be.

All-Star Team Playoffs, If You Wish

With Cactus League Professional Basketball AutoPlayoff, you can set up playoffs with these All-Star teams just like you can with any season.

You can do any thing with these teams and players that you can do with a conventional Cactus League Pro Basketball season. You are limited only by your imagination. Play schedules & playoffs if you want. Make trades. Change Roster & Roles.

Here Is How It Works

When you order The Cactus League Professional Basketball Franchise Greatest Hits, you get all this: